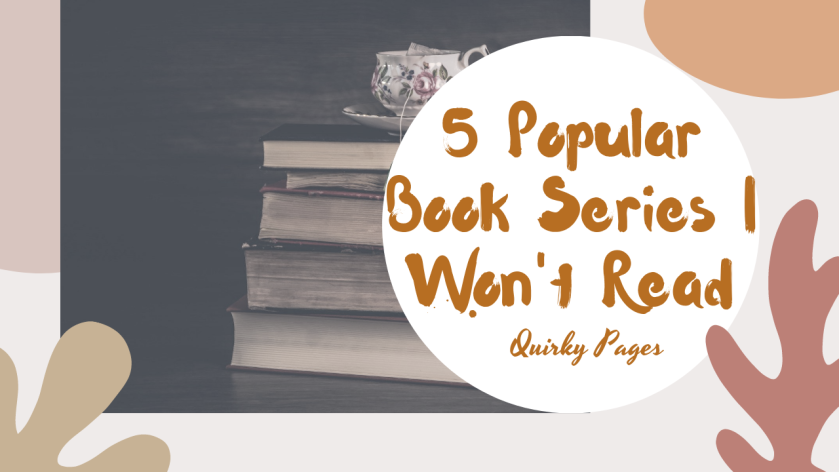 We all love some unpopular opinions now, don’t we?

Hey Pals!! Today, I am going to be talking about 5 popular series that I do not think I will ever read.

Disclaimer: *sighs* I do not mean to insu-a-a-a *yawns* alt any book *yawns* or autho-o-o-or through my pos– *dies of boredom*.

*Nehal’s ghost has replaced her*

cAn yOu StOp dYiNg uNcErEmOnIoUsLy!? I wAs iN tHe MiDdLe oF tHe VeRy iMpOrTaNt TaSk oF eAtInG cHeEtOs, wHicH bTw, I dOn’T eVeN kNoW wHaT tHeY aRe!

*Nehal has kicked the ghost out*

Thanks for thine help, thou art a disgrace to me 🙂.

1: A Court of Thorns and Roses by Sarah J. Maas

Ahem, so first off, I don’t think I like the covers anymore. They do look great when Booktubers hold them up in their hands but uh, really not my type though. So basically, I watched this video, which if you want a good laugh on a bad day, you should watch too.

But the video has some a lot of crude humour so watch at your own risk. I binge-watched Cindy’s reviews for all the books in this series in one go and laughed my head off and my day got a whole lot better…and yes, I realized that this series is not for me 😌.

I’ve read Throne of Glass but I dnfed the series in the middle of the second book, not because it was bad or anything, but because I was just not finding it a book that is “of my type”, not my comfort zone basically. I am not a fan of high fantasy and world building. I know most people love it but I don’t usually care for settings and various dangers on worlds that are new to me, for some reason. I also do not feel myself inclined towards fairies as main characters. Acotar has that too and I am pretty sure that there is no point in reading it. Plus it is very smutty, as Cindy has made sure to point out all too well. And these books are so huge! And now I basically know the entire story and I really don’t think I’ll like it. I don’t wanna force myself to read something I won’t like.

2: The Stormlight Archive by Brandon Sanderson

I know, I know, you want to kill me. But beware, it’ll only end up in my ghost taking over and annoying the hell outta you~

Okay so, I’ve had a bad experience with this author. I tried reading The Final Empire but I’m still stuck at page 100, it’s just so boring 😭. And people keep saying how great it is, but I’m just sick of Kelsier smiling at every little thing…I mean, how much can anyone smile?! I’m telling you, every time he smiles, I cry. It’s like- Kelsier smiled 🙂, Nehal cried ☹. I will still try to push my way through this book after exams, till then, I’ll remove every single book by this author from my TBR pile.

It’s not even that I do not want to read this series, I would love to give it a shot but I am just so freaking intimidated by the amount of pages. I mean, the first book is over a thousand pages and I know that Sanderson’s writing is really slow and people struggle through this series so I just cannot bring myself to pick it up anytime soon. I wish I could, but I can’t. And seriously, no offense to anyone, it’s just not for me.

3: The Wheel of Time by Robert Jordan

I’m sorry, has there been a mistake?!

*frantically googles how many books are in this series*

I’ve officially lost all hope in humanity BECAUSE THIS IS RIDICULOUS!

Something about the ugliness of the cover of the first book in this series intrigues me and makes me want to pick it up. But it’s also giving me Lord Of The Rings vibe and that was another book series that didn’t work for me…I am sorry to all the people who are hardcore fans of this series, but I can’t torture myself by committing to something this long. I’m the kind of person who gets scared when someone says “trilogy”, you can’t expect me to read 14 books, it’ll kill me!

4: His Dark Materials by Philip Pullman

This series has got some really mixed opinions on GoodReads. Many people think that this was a really slow series and to be honest, the fact that it is high fantasy is just enough for me to not want to pick it up. This was actually on my tbr pile but the only time that I see myself picking this up is if I actually get the physical copy of the series. I am just not drawn to it, you know? Like I don’t feel myself wanting to read it. Maybe this could turn out to be one of the best books I have ever read if I do read it, but I don’t really think that will ever happen.

5: Keeper of the Lost Cities by Shannon Messenger

This is the one series on this list that I wish I had read this earlier, like when I was 13 or something. I have no idea if I’ll like it when I read it now or not, and a part of me is dying to pick up the first book and read it right now! But first off, I am not at all excited about reading a long series using all ebooks, second- my bookshelf is full, so my parents ain’t allowing me to buy books too 😒, and third- just in case I do get addicted to this series, it’ll be a bad influence on my studies…plus yeah, a bigger part of me just knows I don’t wanna read it because it’s so long and I don’t think it’ll be that good. Who knows though? Maybe I’ll give it a shot someday…maybe.

So, that’s all for me. I hope you enjoyed this post. Have you read any of these books? What are your thoughts on them? Should I give them a shot? Is there a popular book that you have no interest in reading? Let me know in the comments 😀.

Ps– Before ending this post, I would just like to wish my buddy- Ashmita, a very happy birthday! I know she ain’t gonna do much, but I hope she has an awesome day!! Happy cake day, our dear ghost 👻. Love you loads!! 🍫🎂✨

Yup, I know what you're thinking. What a weirdo, look at that bitmoji. But you see, my weirdness is the thing that keeps this blog running and attracts readers. Proof? Well, you're here, aren't you? So, hop on! I think you'll enjoy your time with me, the eager, enthusiastic, slightly irrational bookworm that I am. Follow me and your daily dose of unnecessary sarcasm and dry humour is guaranteed.