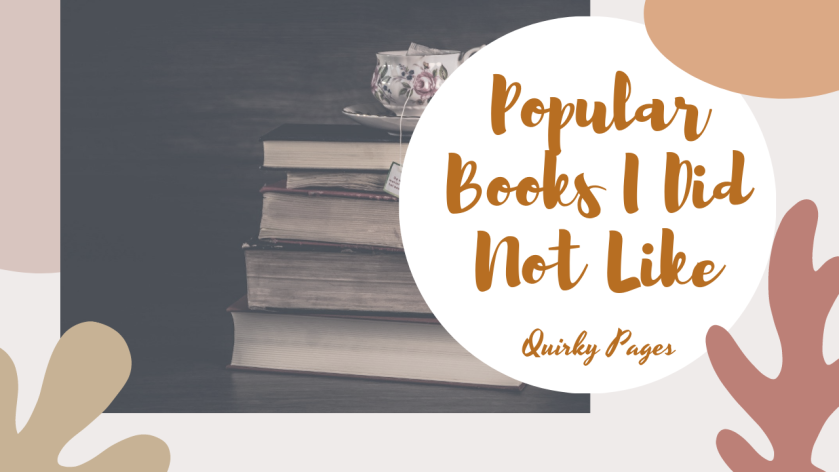 Hey Pals!! Today, I will be sharing with you some popular books that I did not like. Once again, wow what a long intro, but I have tests coming up and I am writing this in a hurry and my intros are never really long anyways so I guess, this is longer than usual, for which I expect to receive a good amount of praise 🙂🔪.

Note: This is a discussion post so feel free to share your views in the comments. Now, let’s get started!

1: The Boy in the Striped Pajamas by John Boyne

This is a historical fiction novel set in the time of World War 2 and written from the perspective of a 9-year-old who is an absolute moron and can’t even pronounce the word “Fuhrer” ‘cuz let’s accept it: kids are that dumb. This book has the most pathetic writing style I have ever read, and being the awesome critic that I am (bragging intended 🙂), I couldn’t even bear to read this without cringing. If I frown every time this book used the phrase “mouth in the shape of an O and eyes wide”, I would become a permanent sulker and all happiness would be stripped from y’all’s lives ‘cuz obviously, what would happen to you if I stopped making you all laugh!? 🙄

This book was super boring, there was absolutely nothing interesting about it. It did get better halfway through when the main character (I don’t even remember his name) befriended a Jew kid in a concentration camp who looked exactly like him, which, by the way, was a very obvious attempt by the author to show everybody is equal. The ending was just as weird, it felt like it was written just to show the cruelty of war and not very well executed. This book had a solid plot, but the worst execution ever. Didn’t enjoy it at all.

2: A Wrinkle in Time by Madeleine L’engle

I reread this book this year because I had loved it the first time I had read it 2 years ago, but now? Man do I have issues. This book was so weird…and not in a good way. There was too much telling and not even a little showing. I can’t even remember the number of times Calvin, this random guy, shows signs of caring for our main character- Meg, (whom I hate more than online classes). Meg is probably the most frustrating character I have ever read, and that says a lot because I have read about characters like Clary Fray. The characters were all awful and everything felt exaggerated. Important scenes were not written with enough….well, importance. This book was just so cliché and so badly executed, I wanted to throw it at the wall and never see it again 😤.

3: The Ballad of Songbirds and Snakes by Suzanne Collins

I read this book last year itself and it was a pain in the butt. This book was so boring, like oh-so-boring 😭, I can’t even…ugh! It took me ages to finish this. At one point I got so annoyed that I skipped complete pages and yet I was still able to figure out enough of what was happening. This book was not bad, but if only it had been shorter I would have enjoyed it. I found Mockingjay boring too, but this was just another level. When I read it, the only thing I liked was the ending, which was very shocking, but looking back on it, it seemed pretty forced and Snow did not previously show any signs of doing “such” a thing. But well, it was still thrilling and that saved the book for me, but I still do not like it.

4: The Hitchhiker’s Guide to the Galaxy by Douglas Adams

This book was not bad at all, it was pretty clever and it was even funny at times. I listened to the audiobook and the narration was good. The thing is, this book was too clever if that makes sense. The author made impossible things sound so possible and so exaggerated that after a point, it just crossed the limit. It was so confusing, I would read one chapter and not get a single word. This was a good book, but it did not work well for me. Even though I love science-fiction, I am not sure if I will continue with the rest of the series.

5: The Hidden Oracle by Rick Riordan

Yes, sadly enough, I did not enjoy this book. After having finished the Heroes of Olympus series, I went into this book with expectations higher than Leo’s dragon- Festus can fly. And boy was I disappointed. This book had a great concept, seriously. I liked the idea of a God being turned mortal and I even liked how it was portrayed, but I did not feel anything else throughout the whole story. I just kept reading because I did not want to DNF this, and it was such a tiring journey 😴.

1) this book follows the same plotlines as every typical Rick Riordan book out there, and I have had enough of that. 2) this book was really slow and boring even, the lack of involvement of the seven main characters from the previous series did less to lift my spirits. And D) the plot itself felt very flat. After reading Heroes of Olympus, I was expecting some super grave, life-threatening danger, worse than Gaia herself. However, the danger in this book was so underwhelming that I don’t even remember what it was in the first place. People do tell me that the series gets better, but I never really continued.

Click here to read my other, similar post- Popular Books That Did Not Quite Live Up To The Hype For Me

So anyway, that was it for me. Have you read any of these books? What are your thoughts on them? Do you plan to read them? What is a popular book that you do not like? Let me know in the comments 😀.

Welcome to my site where I talk about all things bookish and from time to time, put my writing skills to test. View All Posts

Yup, I know what you're thinking. What a weirdo, look at that bitmoji. But you see, my weirdness is the thing that keeps this blog running and attracts readers. Proof? Well, you're here, aren't you? So, hop on! I think you'll enjoy your time with me, the eager, enthusiastic, slightly irrational bookworm that I am. Follow me and your daily dose of unnecessary sarcasm and dry humour is guaranteed.